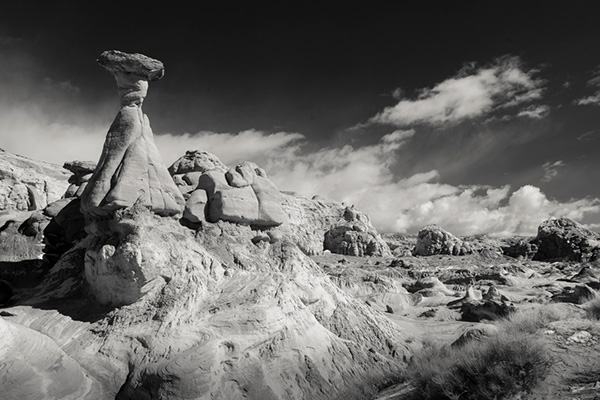 A Winter Weekend of Weather

Well, it’s been a crazy year for weather so far. This past weekend was a favorite annual hot air balloon festival held in Kanab, Utah. Fifty balloons congregated in this gorgeous little town for a fun time of flying and exploring.

Snow. Snow was the topic of the area. It snowed each night coating the red rocks in a white blanket. It was gorgeous. Along with the snow came humidity,  which produced fog and low clouds keeping the balloons sleeping in the trailers.

One good thing about being a photographer and a hot air balloon pilot is that very often when the weather precludes flying, it is almost perfect for going out and photographing! That was the case this weekend. I could barely drive down SR89 towards Page, AZ. without stopping every 500 feet to capture low clouds over the magnificent red rocks of northern Arizona and southern Utah. 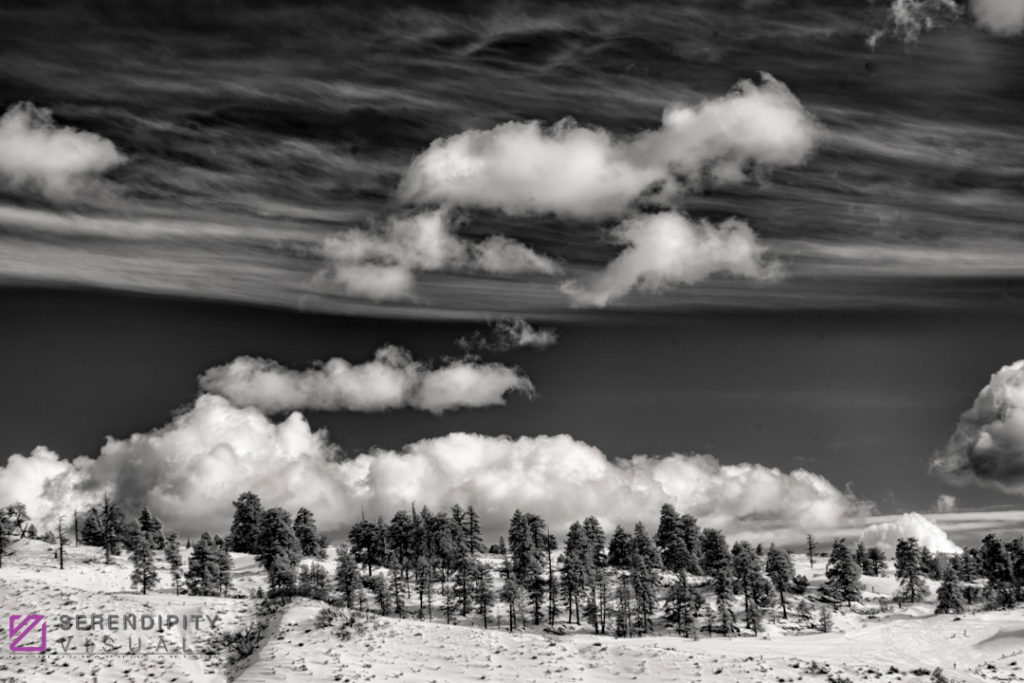 After a great hike in the muddy creek side trail to see the Toadstools (just outside of Page) in this unique otherworldly landscape, my balloon crew and I headed to the west to find some new winter scenes. We found lots of nice graphic scenes, like this curvy fence line. The clouds were moving rather quickly through the sky, presenting new compositions at every turn. We found some groves of trees that  proved to be a fine balance to the clouds in the image above. 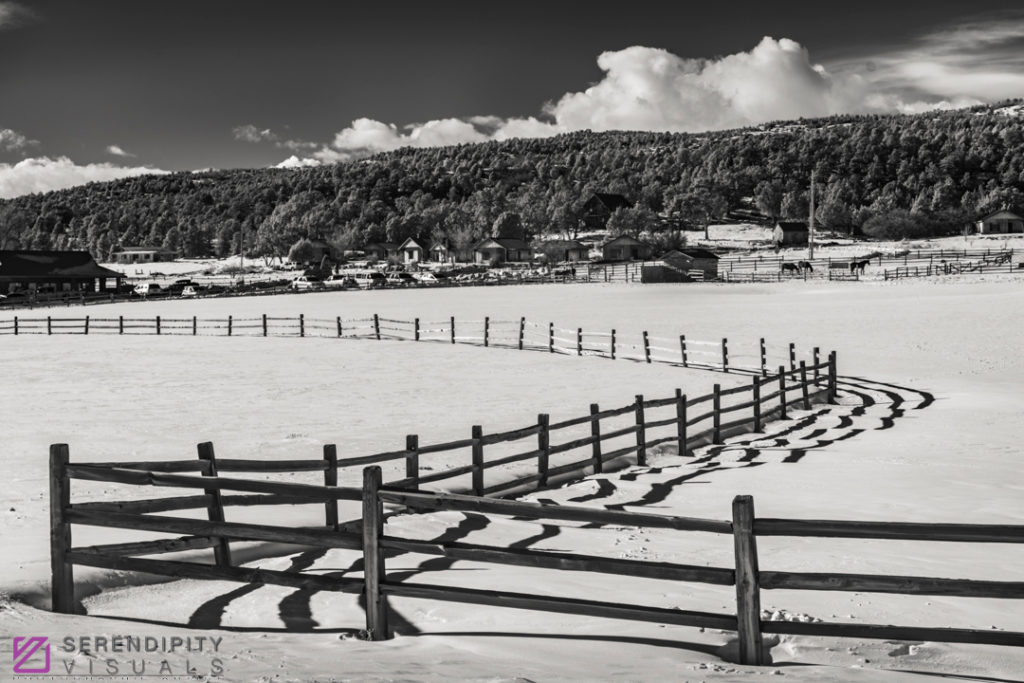 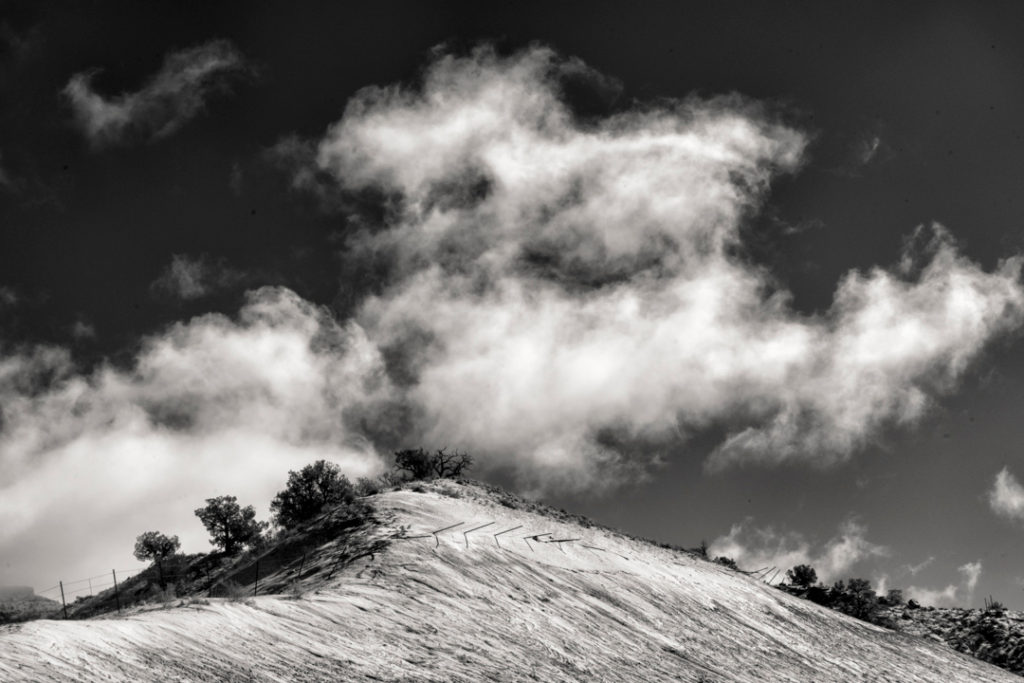 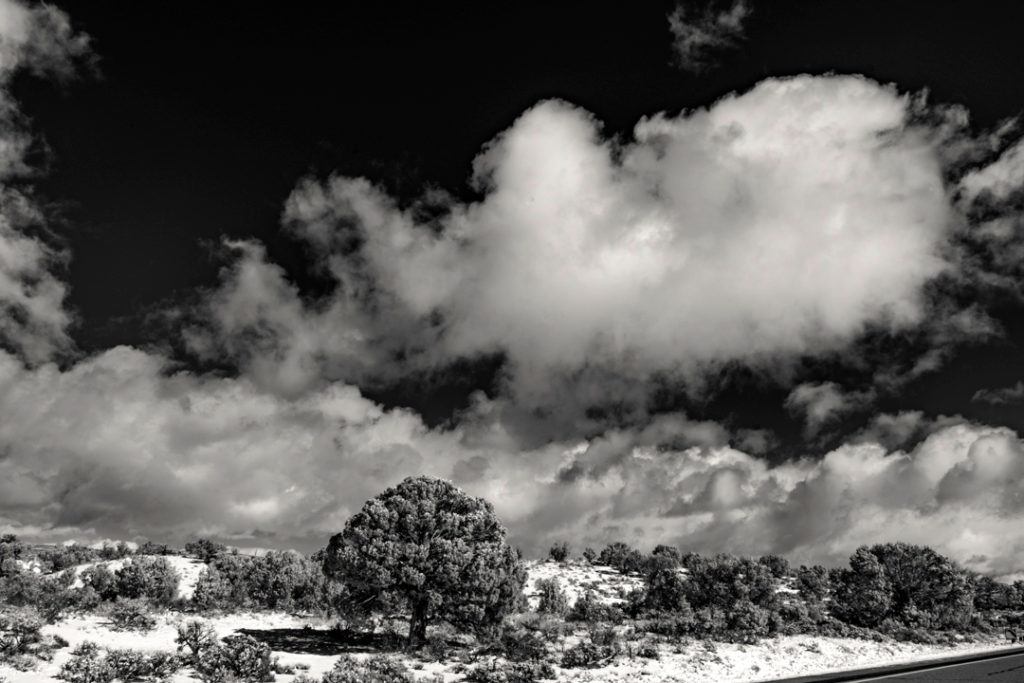 As the sun started to head toward the horizon, it appeared that the snows were going to take the skies over again. You never know what the sky will do until it does it. I’ve been disappointed with waiting for what looked like a brilliant sunset and other times a tiny shaft of light pops out for just a few quick minutes. That was the case tonight. I chose to head into nearby Zion National Park and see what the last rays of light might shine upon. We sat for a short time under the falling snow. Serendipitously, a small window opened in the grey winter sky that allowed that shaft of light to illuminate the Watchman, the sentinel of Zion. After that short window of last light faded, the clouds now overtook the sharp light with softness as the snow returned. I felt that a black and white image could tell that moody story better than the lack of color in the image as it was captured. Often, once the light is gone, black and white actually enhances the shot, for my taste that is. 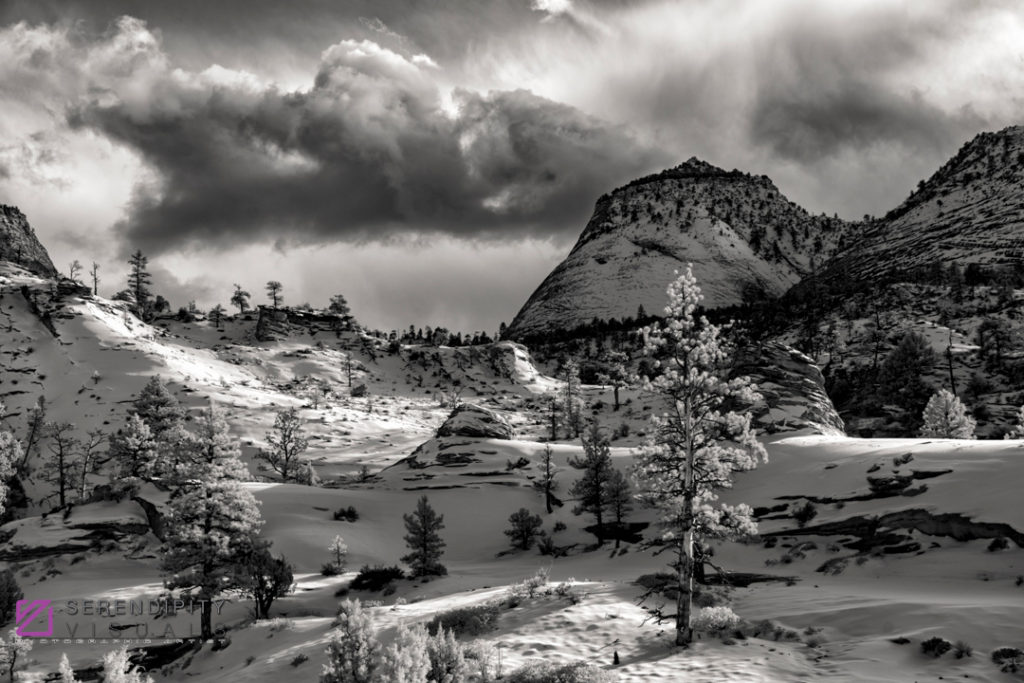 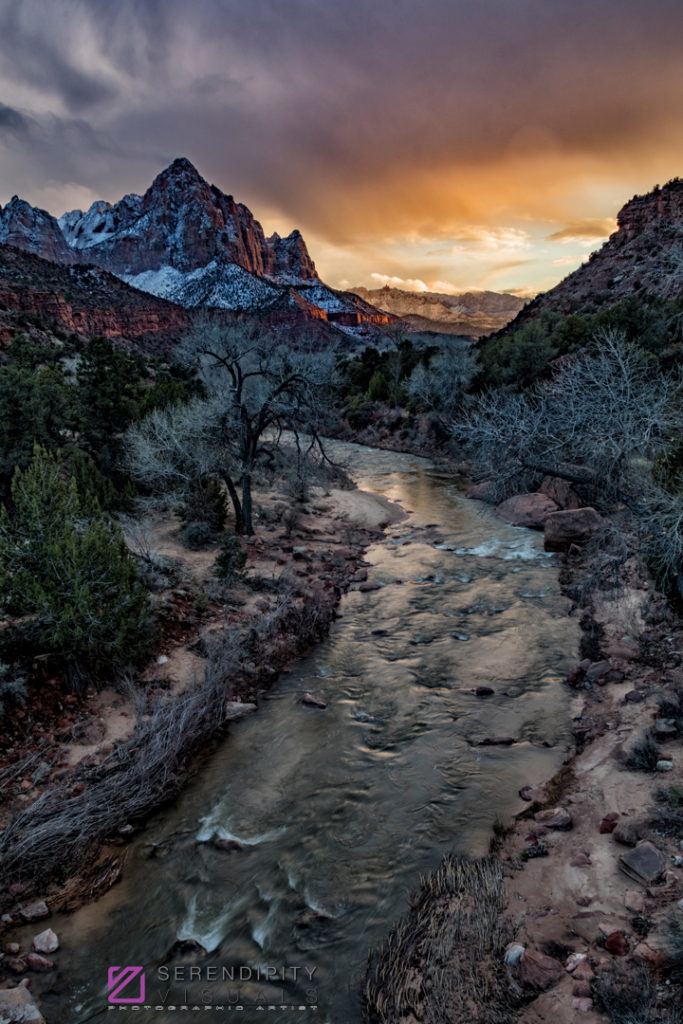 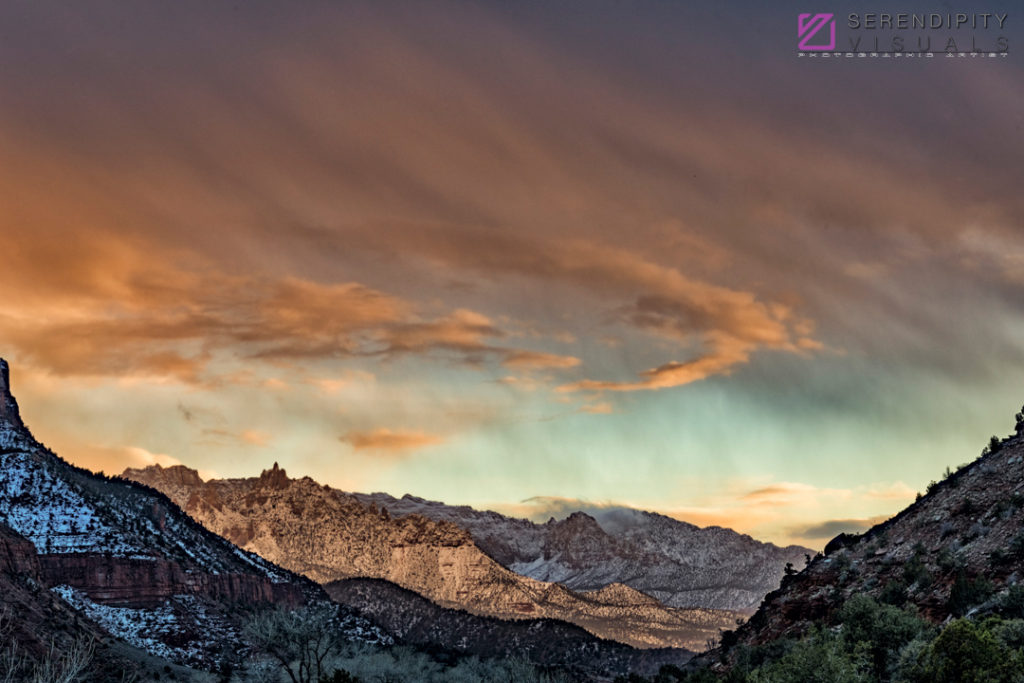 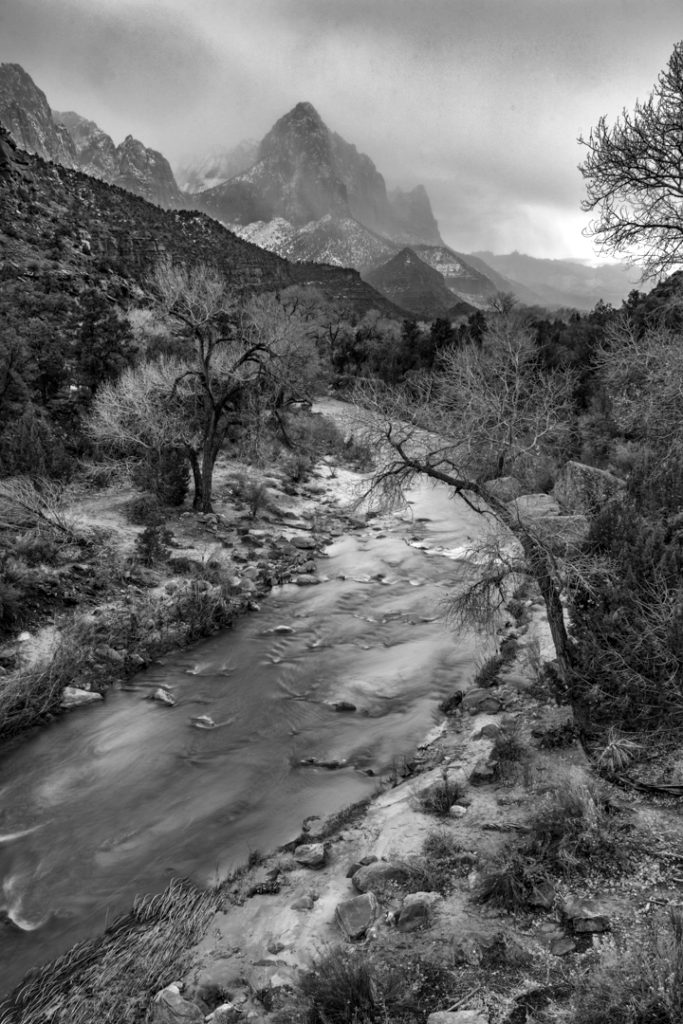 The winter weather reminded my team and I that snow has the power to alter your plans. In order to avoid bad weather on the drive home, we headed down the highway as soon as we could. A major snowfall was forecast for the Flagstaff and Sedona area, directly in our sights for the ride back to Phoenix. During the long drive back, we enjoyed a very entertaining show of light and clouds. Below is an image of one of those beautiful storm cells dropping precipitation of the wintery kind. I love how sensuous the sweep of moisture is. We intercepted the beginning of the major storm as we hit the north end of Flagstaff. We drove in white out conditions for a while as we headed down the hill, homeward bound. The evening would end up covering Flagstaff in over 14 inches of snow. 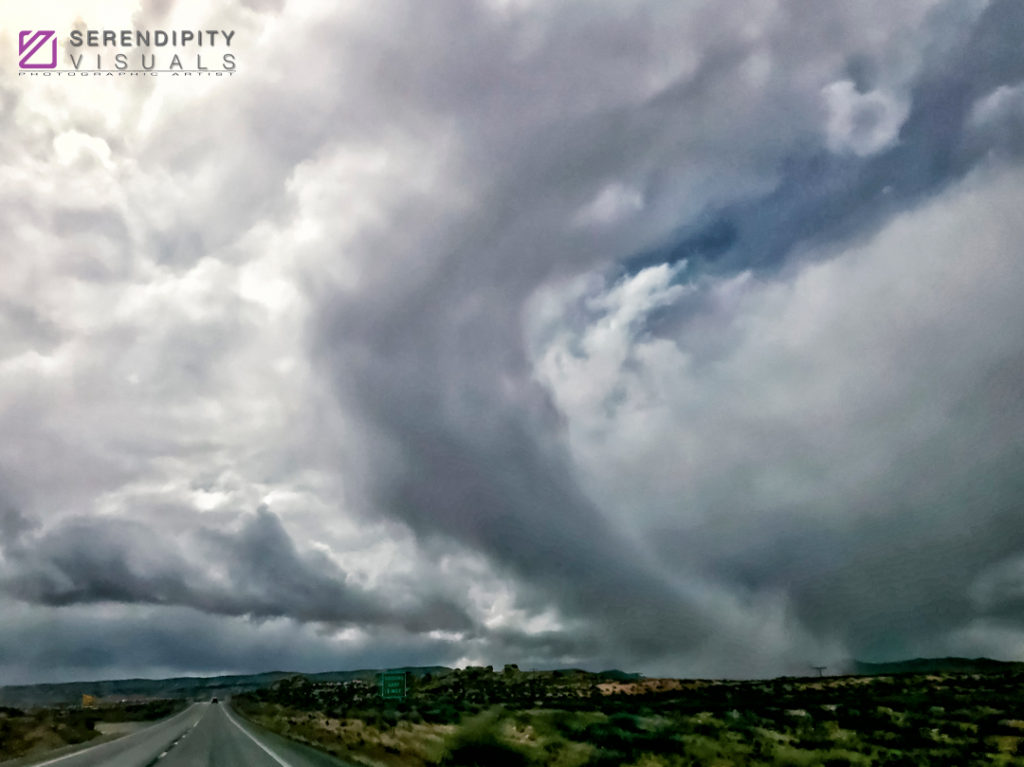 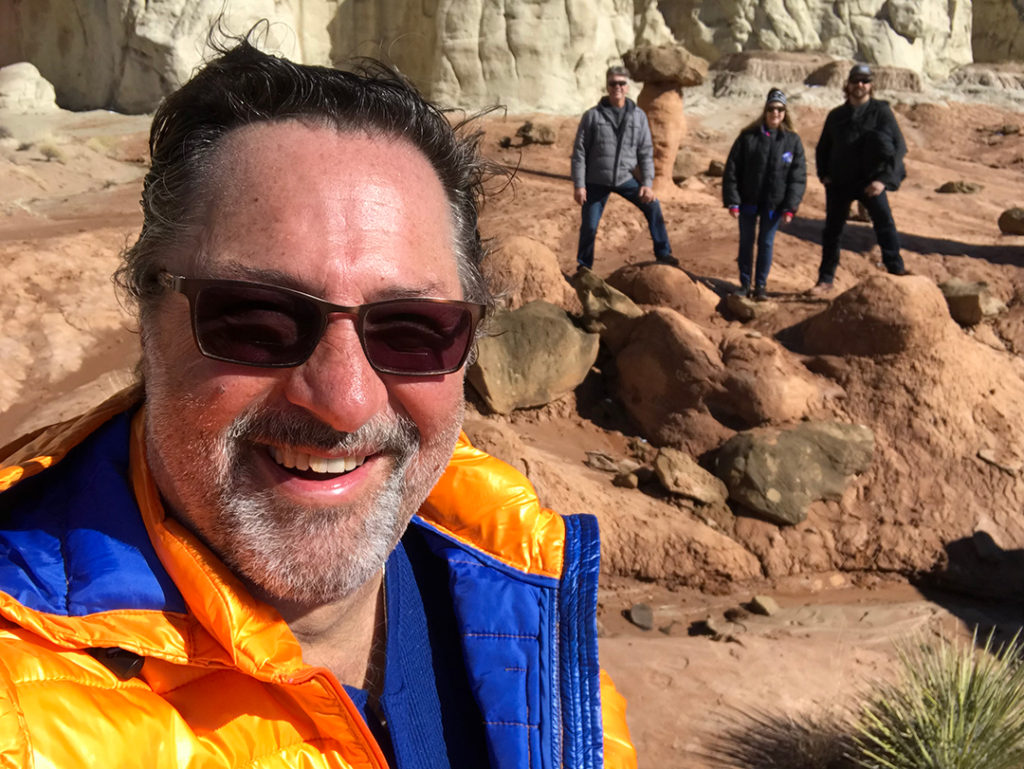 As always, such incredible captures! I was lucky to have camped in Moab and tooled around Zion one summer. I really want to see it during winter sometime. Mahalo, again, for sharing Ken!

Mahalo Deenie! Hoping all is well with you! Moab and the region is such a gorgeous area!

Thank you Roni, I appreciate your kind words.

What a fabulous set of images, but equally engaging was your writing detailing your adventure. Your photography is beautiful to see and really illustrates the glory of winter weather’s beauty. Glad you got home safely!

Hillary, you are very sweet. Thank you! What a fun time out hunting for images in the ccccccold!

Great images, Ken! Thanks for the inspiration!

Thanks Jeff! I’m glad to be able to share these images with you! Great to see you this weekend although too short a time together. I hope that the final leg of the move goes well!~

I love seeing your work. The desert is an amazing place. I can’t wait to one day find myself there, seeing the land that you call home. I love the last light on the rock out there. Beautiful!!

Thanks Karen, waiting and hoping for light is so rewarding when the light actually happens. Whatever beautiful light hits, it makes beautiful, sometimes with just a hint of light…

Your pictures are captivating !!You have a natural eye that leaves us all wanting more!! Thank you for sharing your incredible Art!! You are an inspiration!!

Absolutely beautiful, Ken . . . as usual! Can’t wait to shoot with you again! 🙂